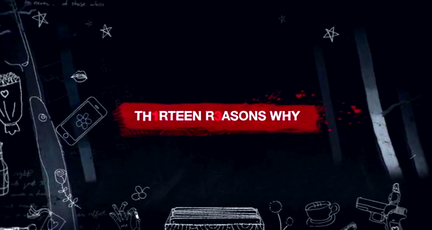 Last night, I finished the Netflix series “13 Reasons Why.” I, like most people, was curious as to why it was trending on social media sites. After I did some digging, I figured that it was a must for someone in my profession to watch due to the subject matter and cultural relevance to teenagers. Let me start off by saying that my opinion is that no one under high school age should be watching this show. The show is rated “MA” for a reason. That means “Mature,” not “Mild-Adolescence” or “Maybe Anyone.” It stands for “Mature,” which means there are scenes and subject matters that are seen and addressed that some kids can’t handle or might not be able to process in a healthy manner. Going by cinema standards, that equivalent to an “R” rated movie. Quick question: would you let your kid watch any of the following movies or shows?  Goodfellas, Game of Thrones, House of Cards, Deadpool or 50 Shades of Grey?  If you answered “no” to any of these, then “13 Reasons Why” shouldn’t be seen by your child either.  I realize that each household is different and you are free to make your own choices, but just because it’s streaming on Netflix, doesn’t make it “suitable for all ages.”  I know of kids as young as 10 years old that are watching the show.

I will be 35 this year and found many scenes disturbing and difficult to watch. There were graphic scenes of car crashes involving teens, suicide, and multiple depictions of rape. That being said, if you are a parent of a high schooler and your teenager is watching/has watched the show, you should probably watch as well.

Something else that a friend of mine pointed out to me, and I agree, is that this show isn’t your “run-of-the-mill” show that will be binged-watched and then forgotten.  I don’t see this as a “fad.” It’s the “cool” show to watch and will be for quite some time.  I am writing this at the end of April 2017 and the show was released at the end of March 2017.  It has been almost a month and we’re still talking about it.  In fact, it is only gaining popularity. What other shows can say that…streaming or network?

If your kids aren’t watching it themselves, chances are, their friends at school are watching. Some, I have heard, have watched multiple times. I had a few takeaways from the show. Some that range from agreement to infuriating. But I want to bring to light and focus on three points that I took away from the thirteen hour-long episodes.

Recently, my students have been going through 2 Corinthians in either youth group or on our podcast. 2 Corinthians 4:8-9 says “We are pressed on every side by troubles, but we are not crushed. We are perplexed, but not driven to despair. We are hunted down, but never abandoned by God. We get knocked down, but we are not destroyed.” Life is hard sometimes. People leave us. Disasters happen. Tragedies strike. But when we have Jesus, we have hope. The students in “13 Reasons” lacked that hope…that “peace of God that surpasses all understanding (Philippians 4:7).”

A friend of mine from high school committed suicide a few years back. We were all left wondering “Why” and if there was anything different we could have or should have done. I remember her mom being so strong at the time and I couldn’t believe how she got through the experience of losing her daughter. Years later, I asked her where she found the strength. Her answer was simple, “I found my hope in Jesus.” Today her strength and faith allow her to help others going through the same tragedy. It’s something no one should have to go through alone.

Another aspect of the series I’d like to focus on is the parent involvement, or often lack there of, in the show. One of the things that drives me nuts in culture today is how parents/parenting is portrayed. Watch Nickelodeon or Disney channel for an hour after school. Parents are usually portrayed as bumbling idiots that can barely change a light bulb or make a sandwich. Sure, the parent might have a word of wisdom at the end of the show but often the prior 26 minutes are spent displaying how adults know nothing and struggle through basic knowledge and understanding of life.

If you watch shows geared for teens, parents are often non-existent.  If you remember, even older shows like One Tree Hill or 90210 had kids with parents who didn’t even live with the kids and the kids had untold amounts of income. They lived in mansions with no responsibilities and no repercussions for their actions. The same ideas are reflected in “13 Reasons Why.” Parents and adults are almost non-existent. Those that are present come across completely detached from the lives of their kids.

Parents, you play a key role in your child’s life. The research bares this out time and again. They look to you for guidance and help as they grow and mature. They may not always tell you or make it known, but your child watches your every move. I have two kids of my own, 5 and 2.  Even at their young age, they mimic the traits that I display, both the good as well as the bad. My 2 year old can pick out songs on our radio that we play and sing at church.  When she hears, “This Is Amazing Grace,” she says, “Daddy… church.”  She can associate a song that she hears on the radio, played in a different key, at a different tempo, by a different vocalist and only sung every six weeks…is sung by her dad at church.  Remember…she’s two.  I’m also reminded of the country song by Rodney Atkins “Been Watchin’ You.”

Driving through town, just my boy and me
With a happy meal in his booster seat
Knowing that he couldn’t have the toy
Till his nuggets were gone
A green traffic light turned straight to red
I hit my brakes and mumbled under my breath
As fries went a flying and his orange drink covered his lap
Well, then my four year old said a four letter word
That started with “s, ” and I was concerned
So I said, “Son, now where did you learn to talk like that?”

He said, “I’ve been watching you, dad, ain’t that cool?
I’m your buckaroo, I wanna be like you
And eat all my food, and grow as tall as you are
We got cowboy boots and camo pants
Yeah, we’re just alike, hey, ain’t we dad?
I wanna do everything you do
So I’ve been watching you.”

We got back home, and I went to the barn
I bowed my head, and I prayed real hard
Said, “Lord, please help me help my stupid self.”
Then this side of bedtime later that night
Turning on my son’s Scooby Doo night light
He crawled out of bed, and he got down on his knees
He closed his little eyes, folded his little hands
And spoke to God like he was talking to a friend
And I said, “Son, now where’d you learn to pray like that?”

Talk to your kids.  Get involved in their lives.  Be their parent, don’t just be their friend. Ask questions.  Be there for them.  Lift them up in prayer daily.  Encourage them. Support them.

Lastly, love one another.  If we commit to building each other up as opposed to tearing each other down, the world would be a much better place.

“Let love and faithfulness never leave you;
bind them around your neck,
write them on the tablet of your heart.
Then you will win favor and a good name
in the sight of God and man.” Proverbs 3:3-4

“Be completely humble and gentle; be patient, bearing with one another in love.” Ephesians 4:2

“Above all, love each other deeply, because love covers over a multitude of sins.” 1 Peter 4:8

There are so many others verses about love.  Just Google “Bible verses about love.”  Why does the Bible talk about “love” so much?  Because it’s hard.  Our society has turned love into an emotion as opposed to an action.  We “fall in love” and “fall out of love.”  We treat it like something that is with us one minute and gone the next.  But the reality is that love is a choice.  How can I “do everything in love (1 Cor 16:14)” if I can’t control my feelings?  That’s because love isn’t a feeling.  It’s a choice.  We choose to love, just like we choose NOT to love.  If the students in the series would have chosen love as opposed to popularity, hate, anger, malice, etc, the outcome might have been different.

Parents, if your kids are watching the show, I suggest you do the same. Talk to your kids about what they are watching. Help them process what they are watching. If nothing else, it may open your eyes to what the average high schooler goes through in 2017. The environment and culture is much different than when you were in high school. Your kid might not be the one experiencing some of the situations depicted in the series, but your child’s friend might be.

And lastly, if you think your student needs help or someone professional to guide them, don’t be afraid to get them the help they need.